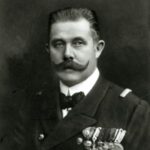 Archduke Franz Ferdinand was born in 1863 in Austria. In 1900. While in power, he attempted to restore Austro-Russian relations while maintaining an alliance with Germany. In 1914, a Serb nationalist assassinated him. One month later, Austria declared war on Serbia and World War I began.