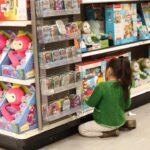 All with no mandate. What does a gender neutral toy look like? Is there a button where the toxic male penis would be?

A toy is an impulse purchase. A kid wants what a kid wants because it’s “cute”, not because it was in a designated gender space on the rack.. This is simple pandering in the worst kind of way. Newsom thinks that he can peel off a few more votes, if the non binaries hear that he carved out a niche for them at the toy store. It makes Newsom (and the entire state) look petty and silly, and unless he’s running against Trump or Elder next time, I probably will not vote for him again.