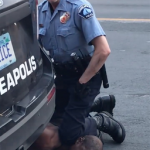 So many of these incidents are cloaked in racism because it’s easier for a cop to do his dirt and write a report that is basically a template from the last incident. Every report uses the catch phrases “feared for my life – super human strength – drugged out – lunged – went for his waist band – went for my gun – grabbed my genitals – blah blah blah”. If one cop shoots, they all shoot and tend to empty their weapon. Overkill – right or is it that dead men tell no tales.

When I was a diver for orange county transit, I witnessed Newport Beach PD beating the snot out of young white boys down on the peninsula.

Because they “HAD” to be beating somebody, and there simply were not enough black and brown people down in the OC to soothe that savage blue beast that drew them into policing in the first place.

Defunding the police is a silly catch phrase, that means something different to each pole of the political spectrum, but we must shake up – not the culture and philosophy of police departments, but the psychosis and psychology of some of the officers, and the unions that hide them, rather than lose those valuable union dues.