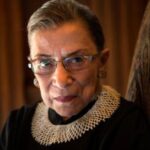 Did democrats simply overplay their hand.
Much angst and pearl clutching is underway because the GOP is not willing to risk the timing of any political advantage.
When Obama won his second term in 2008, lady Ginsburg was at the tender age of 75. She was already having health issues and I said back then that we were treating her like a Pope, and should not expect her to serve until we saw the smoke rising from a bell tower. I was only thinking as a human being – and not a political analyst. Meanwhile there were political hacks, studying the calculus that suggested that Justice Ginsburg retire, to insure that the high Court could benefit from a a healthy, youthful justice for the next generation. I don’t know if it was her stubborn streak or the parties’ naivety that stayed that position.
In 2015, the subject was again broached, but to no avail, partly because the DNC was deep in super delegate shenanigans, meant to deny Bernie Sanders their nomination, so that the “First Woman” president could be coronated. Once the GOP stumbled upon the most flawed and ridiculous nominee in their storied history, the DNC relaxed and took their eyes off the SCOTUS ball. The gamble was allowed and the risk was taken to allow Justice Ginsberg to hold her seat, so that Miss Clinton could also be the “first woman” to name a justice on the Supreme Court.
The Democratic party too often engages in wishful thinking, designed to finger paint glorious fairy tales for future history books. Their opponents remain grounded in the dogma of ancient history and never misses an opportunity to try again to have it trickle down.
They hate the ACA for no other reason than that Rush Limbaugh told them so, when it was called HillaryCare, and they blindly want to see it wiped from their memory. ObamaCare as it is now called also reminds them that the first black president existed. The high Court is also important to them because a balanced court denied Reagan the chance to defeat Roe v Wade. The third rail of their discontent – GUNS will be secure if they diligently follow their dogmatic blueprint for success.
Now the Democratic party is crying foul – as they now face the loss of three seats on the bench, due to their own failure to be as forward looking as their nick name progressive claims to be. Their conservative opponents have a much easier task – refusing to progress at all cost.