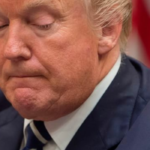 Why does he always think that everything is about him?
Based on the recent rash of indictments against Russian entities, it appears that the Mueller investigation is focused squarely on criminal activity, as it relates to election fraud and interference. That was the stated goal and that goal made no mention of TRUMP. He is only tangentially involved, apparently as a willing pawn and beneficiary of Putin’s anti-American goals.
Mr. Trump continues to flail against the wind, “Fighting back” against his own imagination, claiming that there has been no collusion, when nobody has made that charge. He calls it a witch hunt and Mueller has taken to task nearly twenty witches thus far – including a couple of Americans, that are pleading out.
Unless Trump knows something that Mueller is yet to reveal, “this ain’t got nothing to do with you JT” (to steal a phrase from the 5 Heartbeats movie).

We need you to focus on stacking your administration and the courts with biased, wife-beating, unconfirmable snakes, until your name is called.