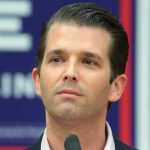 Since we insist on hyphenating everyone, let us look this situation square in the mouth. For the purpose of this punch line, I am an African American. My friend Geoff is a Native American. I know several Jewish Americans and a few Hispanic Americans. My cousin was even married to an Egyptian American.

I said all of that to say this – none of us hyphenated Americans would sacrifice a single soul to serve the political purpose of unseating a Resident of the United States of America. Only a Trump-American would concoct such an evil concept and breath life into it in front of GOD and everybody. Only a Trump-American would be so crude as to claim that a fellow citizen would like to see fellow americans die from the coronavirus, rather than stomach the presence of the spawn of such foolishness through another term.

Shame on you, boy. If your daddy was half a man, he would slap the foul taste of your mouth and a few teeth onto the floor for bringing such disgrace and shame on his name.