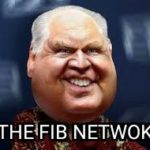 The eggshell skull rule (or thin skull rule or you take your victim as you find him rule of the common law) is a well-established legal doctrine used in some tort law systems, with a similar doctrine applicable to criminal law. It means that frailty of the injured person is not a defense in a tort case.

In other words. If you hit a hemophiliac in the nose and he bleeds to death. That’s murder.
OR
If TRUMP asks Russia to produce Hillary’s e-mails and he’s not on the stage at the IMPROV, that shit ain’t a joke, Limbaugh. Maybe your audience is stupid but, your daddy was a lawyer. Don’t pretend like you didn’t know.

December 5th 2017. Day two of the Hannity Show and still no mention of “The Tweet”, in which the POTUS admitted that as the nation’s top law enforcement officer, he was aware of Michael Flynn’s criminal activities – lying to the FBI, and did not report the crimes.

He has yet to come up with a lie that will cover the obvious obstruction of justice. Instead he is back, focusing on the Hillary Clinton email server.