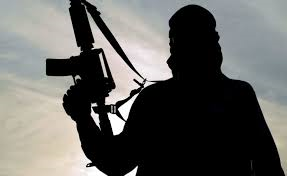 Well, its happened again.
Another example of mass murder, opening up the jaw jacking about gun control. In a few days we will have our few more moments of silence and the church will say Amen. We can go back to talking about North Korea, the Russians, and the evil Colin Kaepernick.

We are unlikely to ever stop terrorism unless we kill them all. The same can be said about 2nd amendment fanatics. We will have to learn to live with them unless we can remove their incentive to bother us. In both cases the shooters are looking for acceptance, and a way out that in their narrow little minds will make them famous. Martyrdom is what the terrorists call it. Here in America, we like to call it suicide by cop, gang activity or mental disturbance. It all comes down to martyrdom. The damn fool wants to go out in a blaze of glory, and we oblige the damn fool, splashing his name and picture all over the 24 hour news cycle. The celebrity only serves to create the next damn foo, and incentivize his murderous rampage.

How can we remove the incentive?
Step 1. When we catch the damn fool, throw away their ID and never mention their damn fool name in the news, so there will be no fame, no glory.

Step 2. Let his family file missing person reports and worry about the damn fool for the rest of their miserable lives. They deserve to suffer at least as much as their relative’s victims. They should have raised him better.

Step 3. Wrap the body in bacon, if they are Muslim (they can’t get into heaven wrapped in pork). Sources say that Israelis hang packages of pork inside public transportation. Apparently martyrs can’t or won’t blow themselves up in the presence of the pork, because it will mix with their remains in the explosion and taint their chances to evolve to paradise. No virgins for this damn fool.

No incentive. We win.